This week we read books about ice cream, and made ice cream in a bag, something I learned from my very first job as a Children’s Librarian, at the North Regional Library in Raleigh, North Carolina.  I was only there for a few months before my husband got a job that required us to move to the Bay Area, but I learned a lot from my coworkers there, and I’ll always be grateful to them.

I was actually debating about making the ice cream in coffee cans instead of plastic bags, since it would be more environmental, but my kids and I tried it three times at home (yeah, they hated being guinea pigs for this one), and we just couldn’t get it to work.  The stuff in the middle would always be too slushy, and the stuff on the sides so frozen it was hard to scrape off.  So I went back to the original plan. I did collect and wash all the plastic bags at the end.  (Stores in our county no longer give out plastic bags, so I actually hoard them to dispose of my cat litter).

Here’s what we read: 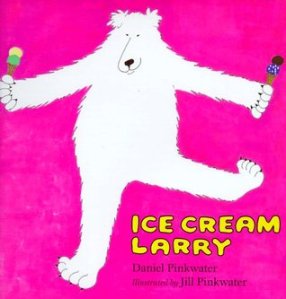 I hadn’t originally planned to read this one, because it’s a longer picture book, but right when storytime started, there was only one 6 year-old and her mom, so I decided to share it with her.  It’s one of a series of books about Larry the polar bear, who lives at the Hotel Larry and serves as the lifeguard for the pool.  In this book, Larry makes the news when he asks a local ice cream shop if he can cool down in their freezer, and then eats 1/8 of a ton of their ice cream.  “I do not feel sick,” he says.  Soon, the owner of the Iceberg Ice Cream company shows up at the hotel to meet with Larry.  He ends up making him the spokesbear for his new line of ice creams, and the company’s new slogan, “I do not feel sick,” becomes a national sensation.  Very silly, but lots of fun to read, and a hit with the kids. 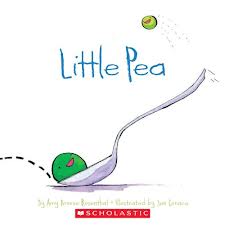 Other families with younger kids had come in during the first book, so I went with this one next.  It’s not actually an ice cream book, but it tied in with my “Candy Corn for Dinner” song that I sang before I read it.  It’s one of my favorite picture books, about a little pea who dreads having to eat his nightly dinner of candy.  This one always gets laughs from both kids and adults. 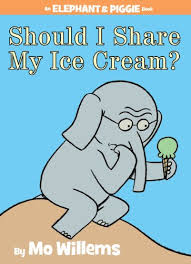 Should I Share My Ice Cream? by Mo Willems (Amazon.com link)

I had to to do this book, which is one of my favorite Elephant and Piggies.  Gerald is just about to enjoy his ice cream cone, when he wonders if he should share it with Piggie instead.  It is a terribly difficult decision, and one that takes him so long that his ice cream melts.  Most of my regular storytime families are familiar with Gerald and Piggie, but there was one new family who had never heard of the series.  I was happy to hear them laughing at the ending.

Frog and Toad All Year by Arnold Lobel (Amazon.com link)

Occasionally I like to share a chapter from an early reader book like this one, and I was reminded of the “Ice Cream” story in this book when my daughter was listening to the audiobook in the car.  To my surprise, most of the kids had never heard of the Frog and Toad books, which I know are still asked for frequently at the library.  In this story, Toad buys two ice cream cones for himself and Frog to enjoy.  But on his way back to Frog, the ice cream melts, covering his face so he cannot see.  Other animals run from him in alarm, and when he finally gets back to Frog, he looks like a scary monster with two pointy horns.  This one got laughs too. 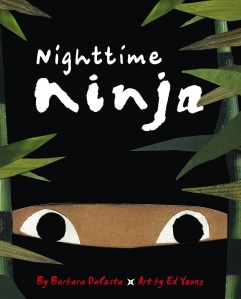 I should have asked ahead of time if the kids knew what a ninja was, because one of them raised the question.  A ninja is stealthily creeping through a house, until he is discovered and unmasked for what he really is: a boy sneaking ice cream from the freezer.  This is a short book that is fun to read aloud because you can build up the suspense in the early pages.

I wrote this song for the storytime, since I couldn’t find many that fit the ice cream theme.  It needs another verse, which I’ll try to add sometime in the future, but the kids seemed to like it.  I’m still too nervous to tell people at storytime when I perform an original song, but it’s a fun challenge to write them.  It’s also not too hard if you know a few chords on the guitar or ukulele, which is all you need for most kids songs anyway.  This one only has three chords: C G7 and F.

I don’t know why Mom and Dad say cooking’s such a chore,
‘Cause I had such a great time going to the grocery store.
My mom said we were out of milk, so I bought a big milkshake,
And since my dad likes cheese so much, I got him a cheesecake.

We’re having candy corn for dinner
With a side of chocolate stew.
A three jelly bean salad,
And an ice cream sandwich too.

If All the Raindrops

This is an old standby that I use for toddler and baby storytimes too.  (I used to sing it to my daughter at toothbrushing time, and it became kind of a game to brush her teeth while we sang the “Aaahs.”)  I asked the kids to suggest other things they would like the rain to be.  One girl suggested chocolate marshmallows, and her mom suggested margaritas.  Here are the traditional lyrics (click on the triangle for the tune):

If all the snowflakes
Were candy bars and milkshakes…

If all the sunbeams
Were bubblegum and ice cream…

CRAFT: Ice Cream in a Bag

I printed out the directions on a half-page handout, in case anyone wanted to take it home.  You can print your own here: ICE CREAM IN A BAG

Before we started, I went over each of the ingredients.  We talked about the vanilla, and I let the kids smell the open bottle.  I showed them the rock salt, and explained that it was important, because without it the ice cream wouldn’t freeze.  (The milk and sugar freeze at a lower temperature than water, but the salt lowers the freezing temperature of water.  When you put it on ice, the ice melts, but it turns into a slushy mixture that is actually colder).

I gave each kid a quart-sized plastic zipper bag (for what it’s worth, the bags I bought from Target claimed to be BPA-free, although I’ve read that the other chemicals plastic companies use aren’t necessarily safer).  I had them hold their bags open, and I poured the 1/2 of whole milk in for them, since it was a large, heavy gallon of milk.  Then I held the bag open for each of them as they scooped in two tablespoons of sugar.  I pour in the 1/2 teaspoon of vanilla extract.  Then I told them to seal their bags tightly, and make sure they were closed (I once had volunteers mix up the ice cream mixture in the bags ahead of time, and they forgot to seal the bags shut.  There were a lot of disappointed kids left holding bags of salty milk).

Once they had their ice cream mixture sealed in the small bags, I gave them each a gallon-sized bag to half-fill with ice.  Then we poured the rock salt in on top of the ice (the recipe calls for 1/2 cup, but I just estimated).  They sealed their ice cream mix into the big bag, and shook the bags while I played some songs on the ukulele.  It takes about 5 minutes for the ice cream to freeze.

Once the ice cream was frozen, I gave out spoons and straws for the kids to each it straight out of the bag.  Some froze more solidly than others, but it has a pretty good flavor that they all seemed to like.

OTHER BOOKS ABOUT ICE CREAM:

This book’s not actually about ice cream, but I was originally going to read it along with Little Pea, since it references that book at the end.  It’s actually a series of phrases that can mean two different things, depending on how you read them.  For example: “I scream!  Two bucks!” (with a picture of someone running away from two angry deer), sounds just like “Ice cream, two bucks!”  The phrases get increasingly complicated, and it’s fun to try and guess what the alternate meaning will be.

Nice overview of the history of ice cream, and how it is made commercially.  This one was a little long for my group, but would work well for a preschool or elementary school class.

Any other books about ice cream?  I would love some more suggestions.