For the last week of my five-week Sizzling Science workshop for fifth and sixth graders, we explored temperature.

I started out with a brief discussion of hot and cold, asking the kids what they thought happened to the molecules of a substance as it got hot.  They guessed that the heat would make the molecules move around more.  At this point, I had planned to do an experiment where I put drops of red food coloring in three glasses of water (one hot, one warm, and one cold) to show that the dye spread more rapidly through the hot water.  Unfortunately, the water heater didn’t seem to be working, so I wasn’t able to get any hot water.

Instead I pulled out a hand boiler and passed it around.  It’s a cheap toy, but a fun one. In middle school, my friends and I used to have temperature wars with the hand boiler in our classroom.  Each of us would hold one end, and we’d see whose hand was warmer by which side the liquid migrated to (I think that was how we ended up breaking the teacher’s hand boiler, and having to buy a replacement: no easy feat in the days before Amazon).  I explained that the liquid inside the bottom bulb reacts to the heat in your hand, expanding to run through the tube in the middle, and appearing to “boil” in the bulb at the top.  We talked about how traditional thermometers work on this same principle, with the mercury moving up the tube as it gets warm and expands.

At this point, I brought out a digital thermometer, and explained that these work with a special kind of electronic component called a thermoresistor or thermistor.  At low temperatures, it does not conduct electricity, but as heat is applied, it becomes more and more conductive. A microcontroller inside the thermometer uses the amount of electrical resistance to determine the temperature.  I put the digital thermometer in a glass of water, and then added some rock salt.  The kids watched as the temperature slowly dropped.  We talked about how salt is used to melt ice on the roads, and how we would also be using it to make ice cream.  The milk and sugar in ice cream freezes at a lower temperature than water, so ice alone is not cold enough to make it solidify.  Adding salt to the ice lowers the freezing temperature, causing it to melt, but also to become colder.

I followed up the salt demonstration with another demo where I put calcium chloride in a glass of water.  This time the water heated up several degrees almost instantly.  I explained that calcium chloride is also used to melt ice on roads.

Now it was time to make ice cream in a bag.  I’ve done this activity many times over the years.  It was one of the first library programs I helped with at my first children’s librarian job in Raleigh, NC.  But this was the first time I had used it as a science experiment.

I started by showing the kids all the steps, which are:

I set up the ingredients on a counter, and had the kids pair up to help each other.  One kid would hold the bag open, while the other poured in the ingredients.  I helped some of them pour the milk and vanilla (the vanilla was especially prone to spilling).  Then they all went to town shaking the bags.  A few of the big bags broke (they don’t make bags like they used to), so we did have some ice and rock salt spills, but thankfully no milk (whew!).  I gave the kids spoons and straws to eat the ice cream. A few complained that the ice cream tasted salty at first, so I ended up suggesting that they rinse the salt water off the outside of the small bag before they ate it.

That part all went pretty smoothly, except I wish I had thought to bring a dairy alternative.  I had one student who not only could not drink milk, but ended up having a contact allergy just from touching it (that came as a surprise even to her mom).  Luckily, she had some medicine on hand for the hives, but I felt badly about it.  Ice cream needs to have a fairly high fat content to make it creamy rather than icy, and the girl suggested she might try making it with coconut milk, which I thought was a good idea.  I actually tried it at home–substituting the half-and-half with 1/2 cup Silk Brand Coconut Milk, and it turned out really well.  It does taste fairly coconutty, which may not appeal to everyone, but I bet it would work with Almond Milk as well.

Ice Cream made with Coconut Milk

I had intended to follow-up the ice cream with homemade thermometers, but the ice cream took about 45 minutes of my hour long class.  Instead I showed the kids the thermometer, and a number of them took some portion of the materials home.  I used the thermometer model described by Mike Calhoun on Education.com: http://www.education.com/activity/article/make_a_homemade_thermometer_middle/ because it seemed less messy than the water thermometer on SteveSpanglerScience.com: http://www.stevespanglerscience.com/lab/experiments/water-thermometer-sick-science.  But that night I woke up in the middle of the night worried that someone’s little brother might drink their thermometer, which contained rubbing alcohol, so maybe the water thermometer would have been better.  Both of them are a bit tricky to transport without spilling.

Basically, both thermometers involve sealing a drinking straw inside a water bottle with modeling clay, with the top sticking out.  For Calhoun’s model, you first fill the bottle about a quarter full of equal parts water and rubbing alcohol, and add a few drops of red food coloring. For the water thermometer, you fill the bottle all the way to the top with water, dyed blue with a few drops of food coloring.  In both cases, you mold the modeling clay around the drinking straw at the mouth of the bottle, trying to make an airtight seal, while keeping the straw itself open.  When you put the bottle in hot water, or hold it with your hands, the liquid inside the bottle expands and travels up the straw (the rubbing alcohol reacts more easily to heat, which is why you don’t need to fill the bottle completely).  You can even use another thermometer to gauge the temperature, and then mark that on the side of the straw or on the bottle (with the water thermometer, you can even tape an index card to the portion of the straw that sticks out of the bottle, and mark the temperature on that). 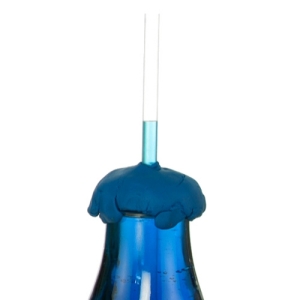 I was sad to say goodbye to the kids in the class, many of whom I had become quite attached to.  They were a wonderful group, and I’m hoping to see them at future workshops.  I was nervous about offering these science classes at first, but they ended up being the highlight of my summer. I’d love to hear other ideas or activities that have been successful in other classes or libraries, so please share them in the comments.