This year, Chinese New Year begins on January 31, and it’s the year of the Horse (you can find a list of all the animal signs and dates on TravelChinaGuide.com).

I didn’t know much about Chinese New Year until we moved to the Bay Area, but it’s such a fun and colorful celebration.  At my son’s school, each Kindergartner decorates a box in bright colors, with holes in the front so they can wear the box on their heads and still see out.  One of the teachers wears a big dragon’s head, and the kids line up behind her, making a huge 60-person dragon that winds around the play-yard, while the first graders pop big sheets of bubblewrap behind them.  It’s something the whole school looks forward to every year.

For storytime this week, I read books about horses and Chinese New Year.

This one was new to me, but the kids always love Lift-the-Flaps (although they argue over who is going to get to open them).  It’s a simple rhyming book that explains the different parts of the New Year celebration: sweeping away the old year, buying fish and flowers at the market, getting red envelopes, and of course, enjoying the big dragon parade.  The illustrations are warm and colorful.  A good introduction to the holiday for toddlers on up.

This is actually a board book, and unfortunately out of print, but it’s a great horse book, especially for younger kids (I read it again today to both a preschool class, and a toddler storytime, and they all loved it).  Mr. Horse offers a cat, a dog, a pig and a duck a ride on his back, but when he gallops too fast, and then stops suddenly, they all fly off into a haystack.  The kids enjoy saying the repeated, “Clip Clop!  Clippety Clop” lines.

Okay, I know unicorns are not horses, but I thought the kids would love this one, and they did.  It was the clear favorite of the evening, for the 5 year-olds especially.  Goat is jealous of Unicorn, and why wouldn’t he be?  Not only can Unicorn fly, he makes it rain cupcakes!  But when Goat finally meets Unicorn, he finds that he’s got some special talents of his own that Unicorn admires, and to Goat’s surprise, they end up becoming friends.  I love all of Bob Shea’s books, especially I’m a Shark and Oh, Daddy!

This is the book for little girls who love horses.  I would have been all over it as a kid.  The little girl in this story wants a pony more than anything else in the world, but her parents say a pony is too expensive, and they don’t have room for it.  So she draws a pony instead, a beautiful dapple-gray she calls Silver, and together they fly through the sky and meet lots of other ponies.  The illustrations are gorgeous.

I do this one often as a bouncing rhyme for babies and toddlers.  This time I had the kids gallop in a line around one of the bookshelves.  They especially liked the sudden “Whoa!” when we would all stop short. You sing it to the tune of The William Tell Overture:

Old MacDonald Had a Farm 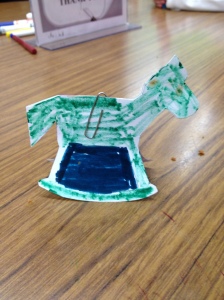 I adapted this craft from AHC Arts & Crafts, which has a tremendous number of craft ideas.  I printed their template, but since I wanted the kids to be able to color their rocking horses however they liked, I traced the template onto white card stock and cut it out (I had to redraw the lines for the base).  I folded the paper in half before I cut it, so it would make a mirror image of the horse.  Then I folded it over, so the two horse shapes lined up.

I gave each child a pre-folded horse to color in with markers on both sides, and a paperclip to put on the back, clipping the two horse shapes together.  If you bend the bottom of the two horses slightly apart, it will stand up.  If you touch the tail lightly, it will rock just like a real rocking horse.

Bringing in the New Year by Grace Lin (Amazon.com link)

This is the book I usually read for Chinese New Year, and I still love it.  It’s shows a family preparing for the New Year by sweeping their house, making get-rich dumplings, getting haircuts, and looking forward to seeing the dragon, which is presented on pages that fold out into a big spread at the end.  In the past, I’ve brought bubblewrap for the kids to pop on the page with the firecrackers.  Simple enough to work for toddlers as well as preschoolers and older kids.

I didn’t get this book in time for my storytime, but it’s a good one.  A Chinese-Korean boy shares what the New Year means to him and his friends from other cultural backgrounds.  I like that the story gives a sense of having a fresh start: a chance to clear away all the mistakes of the past and look forward to the future.  A little too lengthy for toddlers, but I think this would work well for preschoolers and elementary school kids.

Sapphira writes, “Our daughter is a dragon, but this book describes a child who has a good trait from each of the signs. Then at the end it says how lucky the reader is to have this particular baby, and there’s a heart-shaped mirror on the last page, which is always a big hit.”

Are You a Horse? by Andy Rash (Amazon.com link)

When Roy gets a saddle for his birthday, he sets out to find a horse.  The problem is, he doesn’t know what a horse looks like.  Kids like shouting out the names of the other animals he thinks might be a horse, including a snake, a crab, a lion, and a zebra.  Plus it has a funny surprise ending.

What are your favorite horse or Chinese New Year picture books?