First off, I was thrilled to see most of my favorite kids at this week’s storytime after their very first day of Kindergarten.  So exciting!   And everyone (parents included) seemed to have weathered the experience well.  (I know I was a wreck on my son’s first day, so kudos!)

Anyway, a lot of my favorite picture books feature songs and rhythm, so tonight I decided to feature some of them.  They were:

This is one of the best picture book adaptations of a children’s song I know.  It extends the clapping rhyme story about Miss Mary Mack and the elephant who jumped the fence.  The song is catchy, the illustrations are hilarious, and it works for almost any age.  I had the kids pat the rhythm as I read, and afterwards a brave Mom helped me demonstrate the clapping rhyme (since I have the coordination of a drunken tree sloth, I found it a bit challenging, but it was fun). 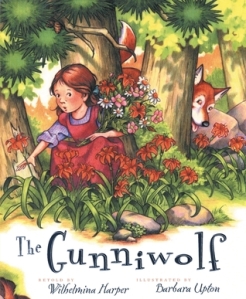 The Gunniwolf by Wilhelmina Harper; illustrated by Barbara Upton

Wilhelmina Harper was a librarian in Redwood City, California.  I wish I knew more about her, because this is one of my all-time favorite read-alouds.  It’s essentially a less grim version of Little Red Riding Hood, where a little girl disobeys her mother by going into the jungle, and runs into the dreaded Gunniwolf.  Thankfully, nobody gets eaten or chopped up with an ax, but the language of the story is unforgettable: the Pit Pat, Pitty Pat of the little girl running, mixed with the Hunker-CHA! Hunker-CHA! of the pursuing Gunniwolf.  Plus there’s an eerie song that goes, “Kum-kwa-khi-wa, kum-kwa-khi-wa.”  I have a soft spot for the original version, with illustrations by William Wiesner, but this version is bright and colorful, and the Gunniwolf looks more like a big friendly dog, which makes it less scary.  Some of the kids sat mesmerized while a couple were frightened, and several of them wanted to check it out at the end. 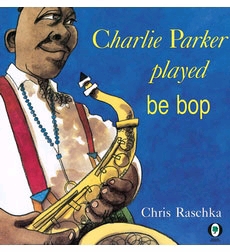 I don’t know how many times I’ve read this book to my own kids, who have both loved it since toddlerhood.  It’s a sound poem about Charlie Parker, the legendary jazz saxophone player, and it’s a blast to read, with lines like “Be bop. Fisk, fisk. Bus stop. Zznnzznn” and my kids’ favorite: “Never leave your cat alone.”  It’s based on Parker’s performance of A Night in Tunisia, and I try to convey some of the melody of that song when I read it.  It’s a wonderful way to introduce the idea and spirit of jazz music.

No one in town wants to hear Miles and his Swamp Band perform, except for the sharp-toothed alligators who ask them to play on their riverboat.  When the band learns that they are on the dinner menu, they have to use their wits and their music to escape.  I love the colorful illustrations and the humor of this book, and it was quickly snapped up for check out at the end.  I usually follow this one with the song “Mama Don’t Allow” and ask the kids to suggest things their Mom’s don’t let them do, which is always entertaining.

Another one of my long-time favorites, this is the story of a lizard who likes to make up songs.   He is happy singing about his home on the rock until Bear decides he wants Lizard’s song too.  The kids usually join in on the simple “zoli zoli” song.

INSTRUMENT PLAY WITH A CD: Little Liza Jane by Elizabeth Mitchell from her You Are My Little Bird album.  Rhythmic and catchy.

I gave each child two paper plates and some rice and/or beans to put in the middle.  The parents helped staple the plates together, and the kids decorated the outsides of their new instruments with stickers, gems, and crayons.   There was some little trails of rice leading out the door of the library that night, so I think next time I’ll just go with the beans, but it’s always fun to give the kids free-rein on how to decorate something, because each instrument was so different from the others.

One that I wish I had been able to read/sing tonight was Iza Trapani’s How Much Is that Doggie in the Window?  It’s one of my favorites, although I’m embarrassed to admit I sometimes get choked up at the end (I’m a terrible sucker for a happy ending).  In this variation of the song by Bob Merrill, a little boy tries to save up to buy a puppy from a local pet shop, but ends up spending all his money to help his family instead.

I Ain’t Gonna Paint No More by Karen Beaumont; illustrated by David Catrow

Love this one!  It’s a funny version of It Ain’t Gonna Rain No More, where a kid decides to paint all the different parts of his body.  The kids like to guess which body part comes next based on the rhyme, and the ending is a gleefully naughty surprise.  I usually pair this with the song Head and Shoulders, Knees and Toes, and repeat it faster and faster.  (It’s also fun to try it backwards: Toes and Knees, Shoulders and Heads)

What are your favorite books about music and songs?