My friend Sue Beckmeyer, who is the instructional media specialist at the K-8 school my kids attend, recently told me about two children’s book awards that are voted on by elementary school students: the Irma Black Award and the Cook Prize.  Both of these awards were created by the Center for Children’s Literature at the Bank Street College of Education in New York.

I was excited to learn about the awards because I read to two classes of second graders every other week, and they LOVE to vote for their favorites.  Sue was especially excited about the Cook Prize because it focuses on STEM (Science Technology Engineering and Math) related picture books, which are a big part of the new Common Core curriculum.  She asked me to share the books with the third and fourth grade classes, and collect their votes.  Here are the books:

This is a fascinating story about a brilliant mathematician who was a century ahead of her time.  Ada Byron Lovelace was the daughter of the notorious poet, Lord Byron, although she barely knew her father.  Her childhood was devoted to math and invention, especially after a bout of measles left her crippled for several years.  As a teenager, she met the famous inventor, Charles Babbage, who showed her his plans to build a “Thinking Machine,” essentially the first computer.  Lovelace recognized that the thinking machine would need detailed instructions to run, and so she set out to write them.  Even though Babbage never built the actual machine, Lovelace’s code is still considered the world’s first computer program.  The two third grade classes I shared this with so far were intrigued by the idea of a computer program that predated computers, and this one got a large number of votes, mostly from girls.

This was the favorite by far of both classes I have read to.  It describes the annual event in Delaware Bay, when millions of horseshoe crabs crawl ashore to lay their eggs in the sand, followed by millions of hungry sea birds.  The kids loved the diagram of the very alien-looking crabs on the inside cover, and seemed really intrigued by the radio tags, and the goopy green eggs.  Nature writing at its best.

Mesmerized: How Ben Franklin Solved a Mystery that Baffled all of France by Mara Rockliff; illustrated by Iocapo Bruno

This was the most challenging of the three books in terms of the concepts it was trying to convey, but it’s a great story.  It describes Benjamin Franklin’s trip to Paris to garner the support of the French aristocracy during the American Revolution.  While in Paris, he found that everyone was abuzz with news of a man named Dr. Mesmer.  Dr. Mesmer claimed to possess a mysterious force that could make people experience strange sensations, or even cure them of various ailments.  But when Dr. Mesmer tried his powers on Franklin, nothing happened.  Franklin suspected that the force was in the patient’s mind.  In order to test his theory, he enlisted the help of Mesmer’s assistant, asking him to use his powers on people who were blindfolded.  As he suspected, when the patient could no longer see Mesmer’s assistant, they would experience sensations even when he was no longer in the room, or feel heat in a different part of the body than he was targeting.  Mesmer was disgraced, but Franklin’s experiments led to the discovery of the placebo effect, which has been an important tool in modern medicine.  The book design and illustrations are eye-catching, and the text includes side bars outlining the different parts of the scientific method Franklin employed.  This book got a number of votes as well.

On Wednesday, I got to share the finalists for the Irma Black Award with two classes of second graders.  This award is chosen by first and second graders, and is for the best read-aloud picture books.  Here are the four finalists:

You Can Do It, Bert by Ole Konnecke

This is the shortest of the four finalists: a cute book about a bird bracing himself to try something new.  He walks out to the edge of his branch, then back again, then has a snack, then finally jumps…down into the water.  The kids liked the surprise that instead of learning to fly, Bert is taking his first plunge from the high dive.  This one got several votes.

It’s Only Stanley by Jon Agee

I love Jon Agee, especially because he did an excellent author visit to the school when my son was in second grade.  My favorite books of his are My Rhinoceros and Milo’s Hat Trick.  In this rhyming story, the Wimbledon family keeps getting woken up by the antics of their dog, Stanley, who howls at the moon, makes catfish stew, fixes their old TV, and finally launches their whole house to the moon.  The kids loved that the space poodle Stanley meets up with showed up on the TV earlier in the book.  This one got several votes as well.

I was happy to see this one on the list, because it is one of my daughter’s favorites.  The kids were intrigued from the moment they noticed the discrepancy between the book’s title (Red) and the clearly blue crayon on the cover.  The story is about a crayon who is labelled “Red,” but somehow can’t figure out how to draw anything red.  Everyone has a theory: he needs to try harder, his label’s too tight, he’s not warm enough.  But nothing helps.  Until one day, a new crayon asks him to draw a blue ocean for her boat, and he discovers he is really good…at being blue.  This was the second most popular book in both classes. 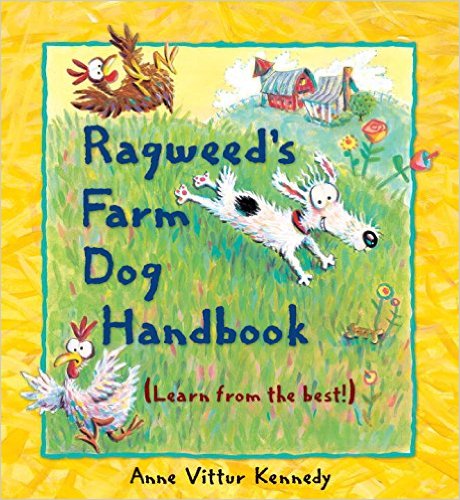 This was the clear favorite for both classes (and my favorite as well).  Ragweed the dog explains how to be a farm dog by taking you on a tour of the farm.  Along the way, he explains the jobs of the other animals: the rooster wakes the farmer.  That’s his job.  That’s not your job.  You will really, really want to wake the farmer, but don’t wake the farmer.  If you do wake the farmer, you can get a biscuit just to go away.  Every animal has a different job that Ragweed finds appealing, but Ragweed’s job is still the best.  His job is: to get biscuits!  The kids especially love the part where Ragweed says if you eat grass, you won’t get a biscuit.  “But you will throw up a biscuit, and you can eat that one again.”  This one is a blast to read aloud, and a hit for all ages.

I really enjoyed reading both the Irma Black and the Cook Prize finalists to the different classes, and am looking forward to trying out the Cook Prize voting with fourth graders this week to see if they make different choices.  Voting for both awards ends on April 17.  There’s a convenient form for online voting on the Bank Street web site.

UPDATE: I finished reading the Cook Prize finalists to the third and fourth grade classes yesterday.  Although all three books got votes, the fourth graders seemed to prefer Mesmerized.  The third graders tended to prefer High Tide for Horseshoe Crabs. Ada Byron Lovelace and the Thinking Machine was a close second for both grades.  The teachers were impressed with all three books, and so was I.  Even though I read them to five classes, I enjoyed reading them each time.  They are a nice mix of science, history, and nature, and all three are very well written.  Kudos to Bank Street for their selections!

UPDATE TO THE UPDATE: The results are in!  The winner of the Cook Prize was Mesmerized, the book that the fourth graders preferred.  And It’s Only Stanley won the Irma Black Award. This wasn’t the favorite of the second grade, but it did get several votes, and I’m happy to see Jon Agee receive a prestigious award.