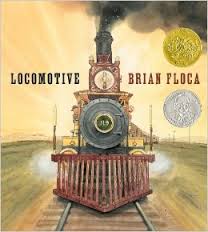 This past Monday, I woke up early to catch the ALA Youth Media Awards online.  I was most curious about the Caldecott Medal because I had promised to read the medal winner and the Caldecott honor books to two classes of third graders later that morning.

I’ll confess that I was a little dismayed by the results.  Yes, they were all wonderful choices, but the winning book was extremely wordy, and all three of the honor books were wordless, or nearly wordless.  Sharing wordless books with a large group is a bit of a challenge. But a promise is a promise, so I shared all four books with both classes that day, and with two classes of second graders later that week.

I was especially nervous about reading the Medal winner, Locomotive by Brian Floca.  It’s a mini-history lesson that recreates a trip from Omaha, Nebraska to Sacramento, California by train in the 19th century.  Floca packs an enormous amount of detail into the text, including how the railroad was built, how the train was operated, and the range of landscapes it passed through.  It’s too long to share with the toddler and preschool groups I usually read to, so I had never read it aloud to a group, and wasn’t sure if it would hold the kids’ interest.  I was relieved to find that it did.

Floca knows his audience well.  Amid all the facts about the train and the railroad, he throws in little details to grab kids’ attention.  All four classes were gleefully disgusted by the idea that the toilet dumped out onto the tracks, and that you could tell if a switchman (the man responsible for hitching the engine to the train) was new to his job if he still had all his fingers.  Floca also portrays visually the rickety terror of the narrow wooden trestles, the darkness of the rough-hewn mountain tunnels, and the dangers that could befall a train with a careless engineer.

By the time I read to the second grade, I was actually looking forward to sharing the journey.  I told the kids we were going to go on a train ride.  I showed them the map on the inside cover, illustrating how the track was built in two parts that met in Promontory Summit in Utah.  And then I read the book.  Along the way, we talked about the different landscapes, and what it would have been like to travel them by wagon before the railroad was built.  We talked about the telegraph, and what it meant to be able to send messages quickly across the country.

The kids seemed truly engaged by the book, exclaiming over the details, and asking questions about the illustrations and the current state of the railroad (I just read that most of the original track is gone, but parts of it are still in use.  Here’s a wikipedia article with a lot more detail).  But I wasn’t sure how the book had gone over until yesterday, when I ran into the mother of one of the second grade boys.  She said, “My son said you read the best book to his class!  Something about a locomotive.  He never tells me anything that happens in school, so it must have really made an impression on him.”

So kudos to Brian Floca for making history so exciting that kids even want to talk about it after school! 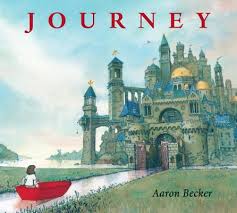 I did “read” the Caldecott Honor books to the classes as well, and they loved them.  They exclaimed over every page of Journey by Aaron Becker, a beautiful wordless story about a girl’s adventure with a magical red crayon.  I loved that in every class, around the fourth or fifth page, the light would dawn across the group, and they’d all start saying things like: “This is like…” “This reminds me of…”  “That book!”  “The kid with the purple crayon!”  And I’d have to stop while they put the pieces together, until finally someone would shout out, “Harold and the Purple Crayon!”  It was so much fun to see them making connections, and getting excited about the story as it unfolded.

My favorite part was when the bird brings the captured girl her red crayon, and she draws a rectangle on the floor of her cage.  “What is she drawing?” I asked.  “An escape hatch!” someone would shout.  “A door!” And then I’d turn the page, and as a class they would exclaim, “A flying carpet!” and you could hear the wonder and excitement in their voices.  Sharing this book made me feel like a magician.  I loved every minute of it. 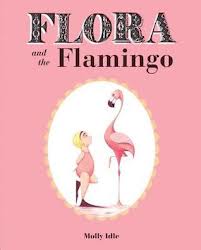 Since the kids had been sitting for a while by now, for Molly Idle’s Flora and the Flamingo I had them stand up and try to emulate the motions of the flamingo, the way the little girl in the book does.  This got lots of giggles, especially when they had to put their heads between their legs, the part that makes the little girl fall down. This is a charming book, especially for fans of ballet, and several kids (admittedly mostly girls) said it was their favorite. 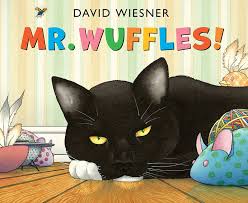 All four classes loved Mr. Wuffles by David Wiesner.  I explained that David Wiesner had won the Caldecott Medal three times already (for Tuesday, The Three Pigs, and Flotsam) and a Caldecott Honor for Sector 9.  Clearly he knows what he’s doing.  Mr. Wuffles is a comic book-style story about a spaceship full of tiny green aliens who nearly fall prey to a big black-and-white cat named Mr. Wuffles.  The portrayal of the cat, who disdains all of his actual toys, but torments the poor aliens, is spot on.  The kids loved the confab between the aliens and the ants, who plot out an escape plan together.  And it’s fascinating to think about an ant civilization, complete with history that they record on the walls.  I wasn’t sure if I would be able to convey the story to such a large group, since there is so much tiny detail in the illustrations, but they loved it.

At the end of the classes, I asked them to vote on the book they liked the best.  All the books had several votes, but Mr. Wuffles was the clear winner.  Granted, I had read that one last, so it was freshest in their memories.  But I figure David Wiesner is kind of the Meryl Streep of the Caldecott Awards.  We all know everything he does is award-worthy, but they can’t give him the award every year.

Anyway, in spite of my trepidation at sharing what seemed like four challenging books, the kids loved all of them, and I ended up having a blast.  Many thanks to the members of this year’s Caldecott Award Selection Committee!