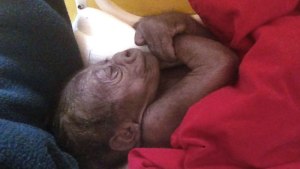 There is a new baby gorilla at the San Francisco Zoo, born on July 17, 2013.   She’s not out in the gorilla enclosure yet.  I’m sure both she and Mom need a while to settle in (I know I wouldn’t have wanted to be on public display during my first few months as a new parent.  The horror!)  But I enjoyed showing my storytime kids the pictures from the zoo web site.  They found her both adorable and frightening, which kind of sums up a lot of the picture books about gorillas too.  And there are many!  Here are the ones I read: 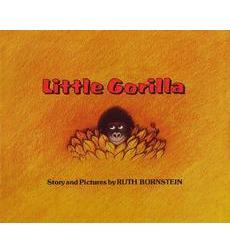 One of my all-time favorite books for toddlers, this is a sweet story about a little gorilla, and all the animals who love him.  But then one day he begins to grow and grow and GROW, until one day he is big.  And everybody still loves him.  I have the kids sing Happy Birthday to Little Gorilla on the page with his birthday cake.  This book seems to appeal to a wide range of ages, and is perfect for storytimes about birthdays and jungle animals.  Even though the color scheme is very 1970’s, this book is timeless, and is always a hit. 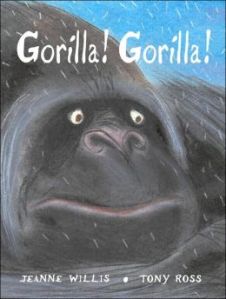 I love Jeanne Willis and Tony Ross.  One of my secret evil picture book favorites is The Tadpole’s Promise, even though it horrifies my son, and I’ve only had the nerve to read at a storytime once.  (The kids loved it.)  In Gorilla! Gorilla! a mother mouse is searching for her baby when a giant gorilla begins to chase her…all over the world.  The desperate chase ends when the exhausted mouse finally stops running, and realizes the gorilla was trying to help her all along.  This book really builds the drama, exaggerating the scariness of the gorilla and the fears of the mouse.  I remember reading this to my daughter when she was two, and it terrified her (although after that first read, she loved it), so I tend to do it more for preschool-aged kids and older.   There was an 8 year-old in my group tonight who said, “That was a really good story!” 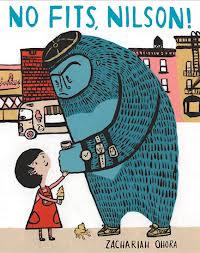 No Fits, Nilson by Zachariah OHora

This one was new to me, but it worked really well.  Amelia and Nilson the gorilla do everything together, but sometimes the smallest things make Nilson upset.  Amelia has to remind him not to have “fits,” especially when they are out running errands with Mom.  But when the ice cream vendor runs out of banana ice cream, it is Nilson who helps Amelia remember to stay calm.  This was a fun read-aloud that gave the kids the chance to join in on the angry “Gaarrrghhs!” when Nilson has his fits.  On the last page, Nilson is revealed to be a toy gorilla, a surprise that the kids enjoyed.  This book would pair well with Llama Llama Mad at Mama by Anna Dewdney, or Mouse Was Mad by Linda Urban and Henry Cole for other stories about coping with anger and life’s daily frustrations. 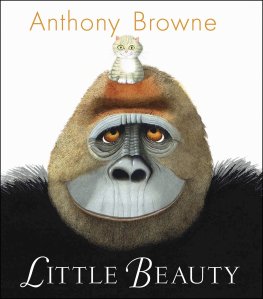 Anthony Browne clearly likes gorillas (in fact, I almost read his book One Gorilla, a counting book about primates).   This story is about a signing gorilla, who is given an adorable pet kitten named Beauty.  The two become inseparable (the favorite page for the kids, of course, is of the gorilla on the potty, while the kitten sits next to him in her litter box).   Then one day the gorilla sees a movie (King Kong) that makes him so angry that he smashes the TV, and the keepers threaten to take Beauty away.  But Beauty surprises them all with a sign language of her own.  The ending is a bit wacky, but the large illustrations are wonderful, and it was fun to talk to the kids about Koko the Gorilla, who lives in Woodside, not too far from here.  I wish I had thought to show them one of the books about Koko and her kittens.   A lovely one is Koko-Love! Conversations with a Signing Gorilla by Francine Patterson.

Although I love the original version of this song by Elizabeth Cotten, I use the more kid-friendly one by Elizabeth Mitchell and ask the kids for suggestions of where to go.  Luckily one of them wanted to go to the zoo, which worked perfectly for my theme.

Ten Candles on a Birthday Cake

Ten candles on a birthday cake (hold up ten fingers)
All lit up for me (point to yourself)
I make a wish and blow them out.
Watch and you will see! (blow on fingers and quickly close hands into fists)

I asked the kids how old they were, and we did the rhyme a few times with different ages.  I even asked the parents if they wanted their ages represented, but sadly nobody volunteered. 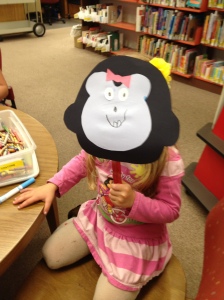 I got this craft from a site called Noah’s Ark Preschool.   There wasn’t a template, but it was pretty easy to draw the faces and heads freehand on construction paper.   I cut out those and the eyes (white circles) and bows ahead of time.  The kids glued the faces and eyes on and drew in their own mouths, pupils, and eyelashes.  We used tape to hold the popsicle sticks on the back.  It was amazing to see how different each child’s gorilla was.

The book I wish I had gotten in time was Goodnight, Gorilla by Peggy Rathmann, the classic nearly-wordless story about a naughty gorilla who follows the zookeeper around on his evening rounds and lets the animals out one by one.   My son and I always enjoyed looking for the mouse and the balloon on every page.

Another one I almost read was My Friend Gorilla by Atsuko Morozumi.  This is a bittersweet story about a little boy whose family takes in a gorilla.  They have a wonderful time together, until some people come to take the gorilla away to a preserve where he will be happier.  I remember reading this to my son when he was little, and he was sad that the gorilla had to go away, which made for an interesting discussion about animals in the wild versus in captivity.

I had also considered doing books about other primates, which might have included Caps for Sale by Esphyr Slobodkina (always a hit!), but also the more recent Me, Jane by Patrick McDonnell, a lovely simple story about the childhood of Jane Goodall.

Any other favorite gorilla or ape books?