Anyway, last Monday was President’s Day, so I thought I’d give a president-themed storytime a try.  I was pleased to find that there are some pretty good picture books out there, some of which I really enjoyed.  The only problem was that my Family Storytime audience  was almost all toddlers.  Don’t get me wrong: I was thrilled to see them, especially because a few of them were new families.  But I quickly realized that, even though I had picked relatively short books, they were still too long and complex for the under-two set.   I adapted by throwing in a lot of songs in between books, excerpting some pages here and there, and then completely abandoning the theme at the end.  In spite of it all, I actually had a great time.  I would rather be a librarian than President any day!

Here’s what I ended up doing.  I’ve included the books that I had planned to read in the list at the end:

If your kids don’t like to brush, read them this book.  Poor George Washington.  Not only did he have that whole Revolutionary War thing to deal with, he also suffered from horrible teeth that rotten and hurt and fell out all the time!  This book tells you exactly how, and when, he lost each one, all in solid, entertaining rhymed verse, which is quite an art.  A lot of the story was lost on the toddlers, but they hung in there, especially whenever I held up my fingers each time George lost a tooth, to show just how few he had left.  The older kids were mesmerized, and one of the moms said at the end, “I never knew that!  It’s kind of disgusting.”  And it is.  But it’s a great picture book all the same. 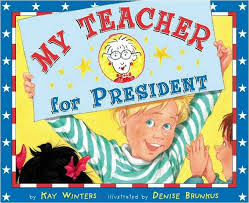 My Teacher for President by Kay Winters; illustrated by Denise Brunkus (Amazon.com link)

I was relieved to have this book in my stack because it was short and simple, with large illustrations.  A kid explains all the reasons why his teacher would make a great president: she is a great listener; she goes to lots of meetings; she is good at finding people jobs.  Each two page spread shows the teacher demonstrating the skill (like catching a loose snake on the page about being good in an emergency), as well as showing how she might put it to use if she were President.  This would be a nice lead-in to a discussion about what kinds of challenges Presidents face, and what kind of person would make a good leader. 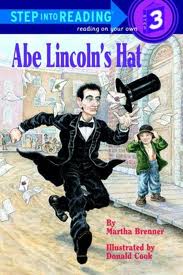 This one was far too long to read in its’ entirety, so I ended up just sharing parts of it.  It’s actually an easy reader about Abe Lincoln, featuring some fun anecdotes about his career as a lawyer.  The part I mostly wanted to share (because of the craft I had planned) was that Lincoln carried letters and important papers inside his hat.  This would make an excellent book to share with an elementary school class for Lincoln’s birthday, since it does a good job of conveying his cleverness, integrity and good humor.

Okay, this was the point where I completely abandoned the theme.  All the other books in my stack were far too long for the toddlers.  So I grabbed this book from the shelf behind me, and it was great.  I even had the kids try to do the dance steps along with Piggie.  In this story, Piggie tries to teach Gerald to dance, even though Gerald tells her emphatically that “Elephants Cannot Dance.”  In the end, Piggie is forced to agree, but meanwhile Gerald has found a following for his “Elephant Dance.”  Totally unrelated to presidents, but the toddlers loved it (thank you, Mo Willems!), and hey, at least elephants represent a political party.

Brush Your Teeth: This Raffi song is always a hit, and it paired perfectly with George Washington’s Teeth.

Head and Shoulders, Knees and Toes: This didn’t connect with any of the books, but was great for bringing the wandering toddlers back in.  I do the song several times, doing it faster and faster every time.  Sometimes, if I want to especially tricky, I’ll have the kids try to sing it backwards: Nose, and Mouth, Ears and Eyes, Ears and Eyes…etc.   I also ham it up a bit by flapping my lips with my fingers when we sing the word “Mouth” and pinching my nose when we sing “Nose.”  Yes, I am a huge goof-ball, which is yet another reason why I will never be President.

Bringing Home a Baby Bumblebee: Another song for the toddlers.  I have a big bee puppet that I brought out for the first verse.  After that I asked for animal suggestions, and we had to invent new rhymes for each one: “I’m bringing home a baby lion.  Won’t my Mommy really start a-crying?” “I’m bringing home a baby grizzly bear.  Won’t my Mommy pull out all her hair?”  etc.

INSTRUMENT PLAY WITH A CD: This Land is Your Land from 20 Great Kids Songs (Amazon.com link)

I thought this craft from Spoonful.com was adorable.  I gave each child a rectangle of black paper, which they rolled around a finger and taped or glued together, a tiny black strip for the hat, a white paper triangle for the shirt-front, a penny for the face, and a red paper bowtie.  They were all very cute.  I thought it was funny that even though I told them at the beginning that Lincoln’s face is on the penny, most of them glued the penny on upside down.

You can do the same craft for Washington, Roosevelt, or Jefferson, but it would be more expensive!

OTHER BOOKS ABOUT PRESIDENTS:

So You Want to Be President by Judith St. George; illustrated by David Small (Amazon.com link)

This one was too long for my family storytime, but I read it to a second grade class a while back when we were showcasing Caldecott Award winners.  It’s a nice overview of the presidents, and the ways they were alike and different.  There are a number of funny anecdotes and quotes, and the caricature-style illustrations are fun.

What Presidents Are Made Of by Hanoch Piven (Amazon.com link)

Another books with simple stories and facts about different presidents.  This one is short enough to use with Kindergartners, or even older preschoolers, especially if you just share certain stories.  Hanoch Piven has a unique collage style, where he uses objects that represent different people to create mixed-media caricatures (for example, his illustration of Ronald Reagan uses jelly beans, and George W. Bush has a hot dog nose).   The stories are simple and fun, and give a more human portrayal of each president.

I was really hoping to share this one, but in the end, it was too long.  When Grace learns that there has never been a female president, she is determined to start by winning the class election.  What I find interesting about this book is that the school election mirrors the electoral college process, with different students representing different states, and some having more votes than others.  In the end, the decision comes down to one vote, and Grace’s hard campaign work pays off.  This would be a great book to share around election time.

This is a nice story about the holiday, featuring a school play about different presidents, with an election at the end.

What are your favorite books about the presidents?