Today I read four recently published picture books to two separate classes of second graders, and asked them to choose which one they would award the Caldecott Medal if they were on the selection committee.

The four books were: 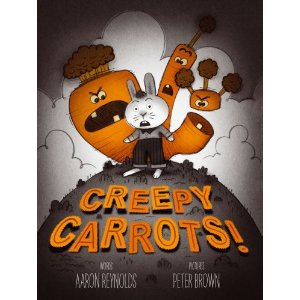 Creepy Carrots by Aaron Reynolds; illustrated by Peter Brown
Jasper Rabbit loves to munch the carrots of Crackenhopper Field, until they start to follow him. The large glossy black and white (and orange) illustrated panels in this book were just creepy enough to keep the kids uncertain about whether they should be frightened or amused. Still, they were riveted all the way through to the surprise ending.

This is Not My Hat by Jon Klassen
A tiny fish boldly steals the hat of a sleeping fish many times his size. He is sure he will get away with it… The fun of this book is in the contrast between the little fish’s boasts, and the illustrations of the big fish hunting him. Younger children may not get the joke, but may not pick up on the implied ending either (let’s just say the little fish gets what’s coming to him). The second graders all knew what was coming though. One boy kept shouting, “No, don’t keep saying things like that. The big fish is going to eat you!” This one got quite a few votes from both classes.

The Day Louis Got Eaten by John Fardell
The overwhelming favorite book for both classes. When her little brother Louis is eaten by a Gulper, Sarah knows just what to do. Unfortunately the Gulper is eaten by a Grabular, who is eaten by an Undersnatch…well, you get the picture. The kids LOVED this book, especially the colorful, cartoon-like illustrations of Sarah, whose bicycle magically transforms to carry her across water, underwater, and anywhere else she needs to go.

I’m Bored by Michael Ian Black; illustrated by Debbie Ridpath Ohi
The second-most popular book for both classes. A little girl complains about being bored, until she meets a potato who thinks kids are boring (and would much rather play with a flamingo). Trying to convince the potato that kids are far from boring leads the girl to demonstrate just how many amazing things kids can do. Another great read-aloud, with large, clear, funny illustrations on lots of white space. The kids liked chiming in whenever the potato said “Boring!”

The kids were excited about all of the books, and begged to have a chance to see them up close afterwards. I had chosen these out of several lists of the best picture published in 2012. It was interesting that there didn’t seem to be much consistency between the lists, and there didn’t seem to be any one clear favorite among professional reviewers. I’m just as anxious as the kids were to know which book actually will win the Caldecott this year!