In honor of the last day of school in our coastal town, I did stories about the beach.  At first it seemed like it was going to be a challenging storytime: there were toddlers who were vastly more interested in the wooden food in our play kitchen in the kids area than listening to stories, and an older girl who was upset from something that had happened earlier in the day.  But once I started reading Rattletrap Car, they all settled in, bringing their wooden snacks to the carpet, and it ended up being such a fun evening.  Here’s what we read: 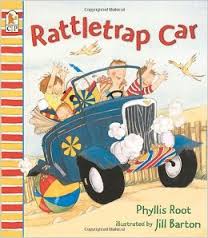 The sounds and rhymes in this book make it a lot of fun to read aloud.  Plus I get to revisit my Georgia roots by laying on the Southern accent.  On a hot day, Junie, Jakie, Papa and the baby set off for the lake in their Rattletrap Car, “it doesn’t go fast, and it doesn’t go far.” Then “Boomssssssss!” They get a flat.  Not to worry: Junie replaces the wheel with her beach ball, and sticks it on tight “with chocolate marshmallow fudge delight,” and off they go…until the floor falls out.  As their troubles (and solutions) mount, the car makes sounds like, “flippita fluppita/ fizzelly sizzelly/ wappity bappity/ lumpety bumpety/ clinkety clankety/ bing bang pop!”  The kids were mesmerized, and this one was quickly snatched up at the end. 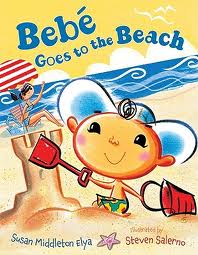 Cute rhyming story about a toddler and his mother at the beach.  The text is interspersed with Spanish words, with clues to help kids decipher their meaning.  The curious, busy little boy keeps his mother on the run as he darts from one activity to another.  This one was a hit too.

Sally Goes to the Beach by Stephen Huneck (Amazon.com link)

Sally the dog is excited to go on a ferry with lots of other dogs to visit an island.  A simple story told from Sally’s perspective, with humorous touches in both the text and the woodcut illustrations.  Sally imagines the ferry captain must look like a dog, and in one picture, it looks as if Sally is driving the car.  The kids especially liked the picture of Sally with a starfish stuck to her nose.  Two girls both wanted this one at the end.

This one got a lot of laughs, especially from the parents.  The style parodies the old Dick-and-Jane-style books, but with surfer lingo.  Dude and Betty have an excellent day cranking waves, until Bud (the dog) eats Dude’s nachos: “Bud is harshing on Dude’s mellow.”  I wish I could read this as well as my boss, Thom Ball, does, but I still had a lot of fun.

Bumpin’ Up and Down in My Little Red Wagon

I sang this song to go along with Rattletrap Car. The toddlers were making a beeline back to the play kitchen, so I decided to sing it the way I heard it once on a Raffi recording, with lots of silly “tools” to fix the wagon.  I used the kids’ names and whatever wooden food they were holding at the time.  It worked beautifully for pulling them back in.  Yay, Raffi!  I played it on the ukulele, which is easy because you just alternate between C and G7.  Click on the triangle for the tune:

Ella’s going to fix it with a banana…

Bumpin’ up and down in my little red wagon.

One wheel’s off and the axle’s broken!…

Sarah’s going to fix it with a sandwich…

I sang this one after Sally Goes to the Beach. We have a lot of stuffed animals in our storytime area, and somehow, in the course of singing this song, I ended up changing Bingo into a killer whale, which one of the girls was holding.  Then other kids started holding up animals, so Bingo became a polar bear, a lion, and Tigger (instead of a farmer, we would sing, “There was a zookeeper had a lion,” etc.  It made it much more interactive and fun.  I will definitely try it that way again.

Two simple songs that I meant to do were Sandcastle and Sand in My Sandals.  I learned both of them years ago when I taught Kindermusik, and they appear to be original Kindermusik songs (here’s a link to the album they came from).  Sandcastle is especially fun, because you can give the kids three or more paper or plastic cups to make a small tower, and then let them knock it down.   Here are the tunes:

Sand in My Sandals:

I got this idea from Family Spot-Blog: http://familyspotblog.co.uk/easy-summer-crafts-for-kids/  It was perfect because I had some blue paper plates left over from my son’s birthday party last year, and some white Model Magic for the sand.  I also had some multi-colored foam sheets (although cloth or construction paper would have worked just as well), so I cut those into rectangles for the towel.  I did buy some cocktail umbrellas, (which made my daughter very happy because she is obsessed with umbrellas).  For the trees, I cut rectangles out of brown construction paper, which I rolled and taped together ahead of time, and I cut thin strips of green construction paper for the palm fronds.  As usual, each child made their scene a little differently, by adding extra umbrellas or towels, or making extra things out of clay, like Ella’s seagull above.

OTHER BOOKS ABOUT THE BEACH:

Three Bears in a Boat by David Soman (Amazon.com link)

A new book that I read about in my friend Kerri’s blog, What is ML Reading?, and had to get for myself.  It’s about three bears who accidentally break their mother’s precious blue seashell, and set off in a boat to find a replacement.  The illustrations are gorgeous, and while the text is a bit lengthy, it’s a fun story with a great last line.

Bats at the Beach by Brian Lies (Amazon.com link)

One of the series of Bats at books by Brian Lies, in this one the bats head off to the beach with their moon tan lotion and “bug-mallows.”  The illustrations are adorable.

Ladybug at the Beach by David Soman and Jacky Davis (Amazon.com link)

My daughter loves the Ladybug Girl books, about a little girl named Lulu, who wears ladybug wings to become a superhero.  In this one, Lulu visits the ocean for the first time, and is frightened by the power of the waves, until she has to rescue a lost pail.

What are your favorite books about the beach?