It’s officially Spring, although, unlike the rest of the country, the San Francisco Bay Area hasn’t had much of a Winter.  Still, you can see some blossoms appearing on some of the fruit trees, and hear frog songs in the creeks and bushes.  I hadn’t ever really thought about frogs as a harbinger, until I noticed that several picture books made that connection.  So I made them the focus of my Spring storytime as well.  Here’s what we read: 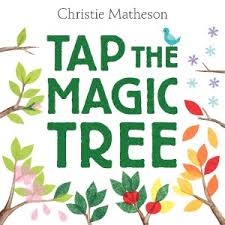 I’m in love with this book.  It reminds me a lot of Press Here by Herve Tullet, because each page asks the reader to interact with the book in a different way.  The first page asks you to tap a bare tree, making a green leaf appear on the next page.  Tap the tree again, and more leaves appear.  Then buds appear, and turn to flowers, which transform into apples.  The leaves change color and fall off, and the whole thing begins again.  I read this book to three different groups this week: one preschool, one toddler, and one mix of ages.  They all loved following the directions on each page and seeing what came next.  A great book for units on trees or the seasons. 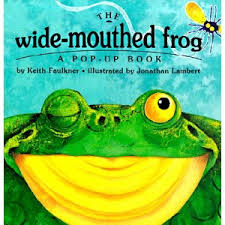 I read this in honor of my coworker, Gwen Miller, who is retiring this month.  This is one of her favorite read-alouds.  It’s a pop-up version of the old joke about the wide-mouthed frog, who goes around asking other animals what they like to eat, until he meets an alligator who eats wide-mouthed frogs!  Sadly, our copy doesn’t circulate, so no one could check it out, but the kids all asked to have a chance to look through it before they went home. 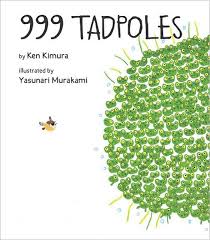 I prefaced this book by asking the kids if they knew what frogs started out as.  Surprisingly, only one of them knew about tadpoles, so I think if I do a frog theme in the future, I will be sure to share a book that describes that process in more detail.  This book was a hit anyway.  When 999 tadpoles become 999 frogs, their parents have to seek out a larger place to live.  On the way, their father is taken by a hungry hawk, and they all join together to save him.  The illustrations of the 999 frogs dangling in a huge chain from the hawk’s claws made all the kids laugh, and there was a mini-squabble over who would get to check it out at the end.

I Spy With My Little Eye by Edward Gibbs (Amazon.com link)

I had originally planned to read City Dog, Country Frog by Mo Willems for my last book, but I had this one in my stack and the kids begged to hear it.  It’s an I Spy game using very simple clues to help kids to guess different animals: a blue whale, a gray elephant, a green frog.  What sets it apart are the large, colorful illustrations, and the hole in each page showing the color of the next animal.  The kids easily guessed all the animals, even the orangutan.  A great book for color or animal themes.

I sang this with a crazy frog puppet I found in our animal bin, which makes burping noises or buzzing sounds when you put your hand in his mouth.  The kids all clambered around me for a turn.

INSTRUMENT PLAY WITH A CD:

Red Red Robin by Rosie Flores from Sing Along with Putumayo (Amazon.com link)

There are lots of different versions of this craft online, mostly involving paper plates (here’s an example from Drexel Paper Cuts).  For mine, I cut out circles, and front and back feet from green construction paper.  I folded each circle in half, and cut a narrow piece out of the middle. I had some foam craft sticks in different colors for the tongue, and wiggly eyes (if I had had more time, it would have been fun to make eyes that stuck out on the top).

All of the frogs turned out differently.  Several kids put the eyes inside the folded piece of paper, so they looked like the one below.  They all loved the foam craft sticks, and some kids even made their own crafts (stick people and airplanes) by taping several of them together.

Spring is Here by Will Hillenbrand (Amazon.com link)

An adorable book about a mole who tries to wake up his friend Bear in time for Spring.  Large, colorful illustrations and simple, repetitive text would make it perfect for toddlers.  My daughter loved it.

This is a sweet, somewhat sad, story, far different from most of Mo Willems’ other picture books.  It even has a different illustrator, and features large, expressive paintings of the animals in the countryside.  A city dog visits the country throughout the year, playing games with his friend Frog, until the Winter comes and Frog is nowhere to be found.  The following spring, the dog returns and makes a new friend.  A lovely, subtle book about the cycle of the seasons and the cycle of life.

A lovely book of large photographs featuring different things you might see in the Spring: baby birds, frogs, fawns, flowers, etc.  I didn’t get this one in time to share at storytime, but it would have worked well because of the photographs of tadpoles turning into frogs.

What are your favorite picture books about frogs or Springtime?