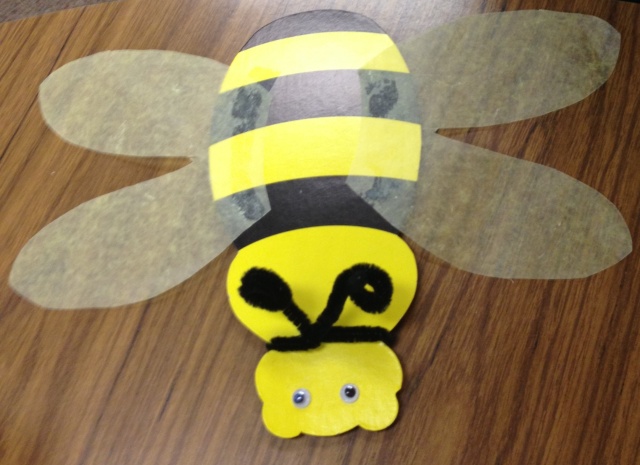 My son loves bugs and spiders and all manner of creepy crawly things.  So I was excited to trot out some insect books, especially after I was given this premade craft set by his former preschool teacher, Pauletta Cravotto, a personal hero of mine.  Here’s an article that appeared in our local paper when she retired.  My favorite quote is about why she enjoys working with young children:

“They don’t have agenda and they don’t have a plan,” Cravotto said. “If you forgot something, or your dog has eaten up part of your planned event and you have to invent on the spot, they don’t care. Nobody knows where ‘this’ day is going. Maybe it will be magic.” “I think kids need to know that they are perfect exactly the way they are,” Cravotto continued. “They don’t fit into a mold, nobody does. Give them some space and who knows what they will accomplish?”

So, with that in mind, here was my storytime.

I was surprised last night because, along with my regular kids, who are rapidly approaching Kindergarten, I had one VERY young toddler and three MUCH older kids–they looked to be 9 or 10 year olds.  I tried to incorporate a range of books to accommodate them all, but it was tricky. 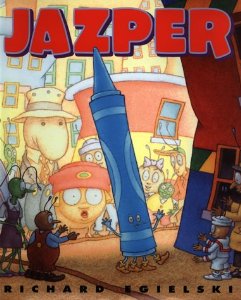 This is one of those bizarrely original stories that stick in your head.  When Jazper (who is some kind of green insect) learns that his father has been injured in his job at the tomato plant, he offers to take a job of his own until his dad gets back on his feet.  He ends up working as a housecleaner for five moths, whose house is filled with books of magic tricks.  Jazper uses the books to create his own astounding magic act, until the angry moths come after him.  Filled with bright, quirky illustrations of Bugtown, this one had the kids mesmerized.

Itsy Bitsy Spider by Iza Trapani We sang “The Itsy Bitsy Spider” before I read this book, and one of the older kids said, “Did you know there’s more to the song?”  I asked him how the next part went, and to my surprise, he started singing the next verse from this book.  So go, Iza Trapani!  Your additional verses are catching on.  This really is a lovely book, with wonderful illustrations.

Diary of a Fly by Doreen Cronin and Harry Bliss The kids fought over who would get to take this one home.  Most of them knew the series already, but the books are always a hit, even though some of the humor goes over the heads of the younger ones.  The part about eating “regurgitated food” got a gratifyingly number of “yucks!,” once I explained what it meant, and it really does teach a lot about flies while being very silly and entertaining. 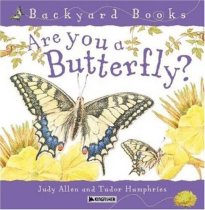 Are You a Butterfly? by Judy Allen and Tudor Humphries

My favorite nonfiction series for preschoolers, these books teach amazing facts about different creatures in an easy, accessible, story-like format with great illustrations.

(I usually do a second verse with the “great big hairy spider.”)

Here is the Beehive

Here is the beehive  (make a fist)
Where are the bees?
Hiding away where nobody sees.
Watch and you’ll see them come out of the hive.
1,2,3,4,5  (open fingers one at a time)
They’re alive!!!  (fly bees around and tickle kids)

I didn’t get around to it last night, but if I had had time, I would have done “Bringing Home a Baby Bumblebee” (I like to have the kids suggest other animals they would like to bring home, and we make up rhymes like, “I’m bringing home a baby li-on.  Won’t my mother really start a-cryin'”).

I had also thought about doing “Ants in Your Pants.”  If you haven’t seen the video by Eric Herman, check it out.  It’s one of my daughter’s favorites: http://www.youtube.com/watch?v=HYWycl8vR5c

The craft set I had used the tissue paper wings and card stock bee bodies already cut out, so the kids just had to glue on the eyes and wings, and add the pipe cleaner antenna.  I was originally planning to do this, much simpler version, where the bodies are made out of construction paper loops: http://lizziejanebaby.blogspot.com/2012/06/20-bug-crafts-to-make.html  Incidentally, this site has LOTS of great bug crafts.

I did a spider storytime not too long ago, but one of my absolute favorite books is Aarrgghh!  Spider! by Lydia Monks, about a spider who wants to be a family pet.

What are your favorite insect and spider books?

One thought on “Snug as a Bug in a Book: Creepy Crawly Storytime”