A week after challenging two second grade classes at a local elementary school to pick their favorite book out of four picture books published in the past year, I read them four more. Here they are: 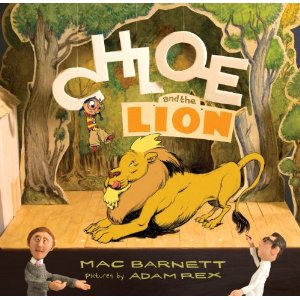 Chloe and the Lion by Mac Barnett; illustrated by Adam Rex

This is one of those books where the author and illustrator enter the story, this time to get in an argument about whether Chloe, the protagonist, encounters a lion or a dragon. In a fit of egotistical rage, the author, Mac, fires Adam, has him eaten by the lion, and hires a new artist. But he isn’t happy with the results.

The kids got a kick out of this one, and it did get several votes. It’s a challenge to read aloud, because it reads more like a play or a comic, so I had to find really distinctive voices for each of the parts to convey who was speaking. I have to admit that even though it’s a funny book with a clever premise, I was uneasy about a couple of things. For one, the author says another character is “clearly an idiot,” which is something that I probably wouldn’t have even thought twice about when I was a kid, but the climate today, especially in schools, is really sensitive to words like “idiot” and “stupid.” The word did get a sort of surprised (and slightly delighted) reaction from some of the kids, as if I read the f-word out loud in class. But the author in the story is being a big jerk, so I guess it fits his character.

My other concern, which bothered me more, is that when the author draws his own pictures, the other characters go on and on about how horrible they are. This point is crucial to the plot, because it’s how the author gets his come-uppance and learns that the illustrator is important (it’s also how he gets the illustrator out of the lion). But the drawings that the other characters are insulting are still much better than anything I could draw, and probably better than the second graders I was reading to could draw as well, so it pained me a little to plant the idea that these were horrible drawings.

I don’t know. I’m probably being a bit too sensitive, which is unusual for me because I usually love the slightly edgy picture books. In any case, the book has gotten a lot of attention, and appeared on several Best of the Year lists, and the kids certainly did seem to like it. Plus it presented a fun challenge for me as a storyteller, and gave me a good opportunity to discuss the difference between authors and illustrators. Not my favorite of the year, but I can see why it is popular.

This was far and away the favorite in the first class I read to. It’s kind of a bizarre version of “If You Give a Mouse a Cookie.” Apparently dragons LOVE tacos. AND parties. They especially love TACO PARTIES. But, the narrator warns, you must be very careful not to give them any spicy salsa, or terrible things will happen. Which of course, they do. The kids loved the pictures of the dragons breathing fire uncontrollably and burning the house down. And the book made both classes laugh out loud. Definitely one I will be reading again at storytimes. 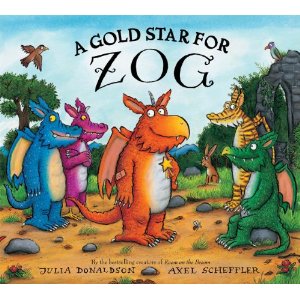 A Gold Star for Zog by Julia Donaldson; illustrated by Axel Scheffler

By the author/illustrator team behind The Gruffalo this is another funny, colorful, rhyming tale, this time about a dragon who longs to earn a gold star at dragon school. Each year he gets injured in some way, and is rescued by a girl who turns out to be a princess. As the mother of a preschooler deep in the princess phase, I appreciate it because it is an “Anti-Princess” book. Or at least the princess declares she’d much rather be a doctor. I also like how she puts a stop to the near battle between the dragon and a knight by complaining that “the world’s already far to full of cuts and burns and bumps.”

Surprisingly, this one didn’t get many votes from either class. I think they all enjoyed listening to it, but it wasn’t as laugh-out-loud funny as some of the others, and it felt a bit long. I think it probably work better for kids to read one-on-one, because they’d have a better chance to take in the detailed, whimsical drawings. 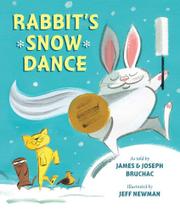 This was the top choice of the second class, and my favorite of all the books on the “Best of the Year” lists so far.

Joseph Bruchac is known for his versions of Native American folk tales (as well as his delightfully creepy novel Skeleton Man). This picture book is based on an Iroquois legend explaining why rabbits have short tails. The story goes that Rabbit once had a long, beautiful tail, but one summer he grew impatient with the weather and wanted it to snow, so he played his drum and sang his special song over and over again, until everything is covered with snow except for the highest branch of the tallest tree. And there Rabbit falls asleep, and well, let’s just say he learns his lesson.

Ever since I first read this book to my three year-old two weeks ago, she has been going around the house chanting, “I will make it snow. Azikanapo!” and “EE-OO! Thump! Thump! EE-OO! Thump! Thump! Yo Yo Yo! Yo Yo Yo!” The second graders were no different. Even though it was the last book I read on a glorious sunny Friday afternoon at the very end of the day, I could hear them in the halls after school singing, “EE-OO! Thump! Thump!” Even though it’s a bit lengthy for some of the age groups I usually read to, the chants are enough to hold their interest. This is a book that will probably become one of my all time favorite read-alouds.

The second graders are all anxious to know which picture book will win the real Caldecott Award tomorrow morning, and so am I. I’ve promised that I will do my best to try to bring the actual book in to read to them on Friday. I hope they won’t be disappointed in the result. Some Caldecott winners are definitely more readily appealing to kids than others, and I’m curious to know what this year’s committee decides.

No matter who wins, it’s been a fun and engaging exercise for both me and the kids to see which ones they liked the best. Even though there were clear favorites in both classes on both the days that I read to them, there were a lot of different opinions. And that was only with four books each week to choose from. I can’t even imagine how hard it must be for the Caldecott committee to choose one winner out of all of the hundreds of books that have been published this year!