Dr. Seuss’ Birthday (his 110th, if he were still with us) was on March 2, so a Dr. Seuss storytime was definitely in order for this week.  It’s not as easy as it might sound, because most of his books are too long for the baby/toddler crowd.   But a number of his easy reader books still fit the bill for my Family Storytime.

I’m still in awe of Dr. Seuss.  I don’t think anyone’s ever quite matched his genius for telling compelling stories in memorable rhymed verse using simple language, all with unforgettable characters and artwork.   As a kid, I think I owned only three of his books: The Eye Book; Thidwick the Big-Hearted Moose (which is admittedly a bit dark, but I was obsessed with it); and The Cat and the Hat Comes Back.  (Although oddly, not The Cat in the Hat).  I read them each countless times.  The Eye Book was actually the very first book I remember reading on my own.  (It’s also the first book I remember reading that mentioned pink underpants!)

For Family Storytime, I had pulled a wide selection of Seuss books.  I was hoping to get to The Cat and the Hat or Green Eggs and Ham, but the storytime audience that night was large, with a number of younger, wiggly guys, so I stuck to the shorter ones (although oddly, a number of these are not actually illustrated by Dr. Seuss).  The kids loved them all.

I started out the storytime by asking the kids if they knew what Dr. Seuss’ real name was.  Most of them didn’t know, or had forgotten, that it was Theodor Seuss Geisel.  I also like to point out that a lot of his books, especially the beginning readers, were written under the pseudonym Theo LeSeig (in many libraries, these are often shelved under L instead of S, which can make them hard for kids to find). 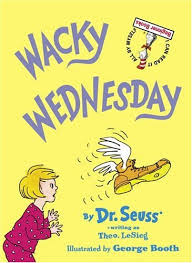 This one actually ended up being a bit tricky, because the kids kept popping up and down in front of me in their eagerness to point to the wacky things happening on each page.  Finally, I stood up so they could all see.  In spite of that, they were all mesmerized.  My daughter loves this book, and laughs at every wacky illustration. 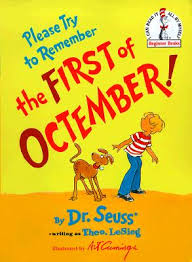 I actually wasn’t familiar with this one until I helped someone find it on the shelf last week.  What a great book!  The narrator promises a boy that he can have absolutely anything he wants…on the first of Octember.  I love that it’s kind of a wish fulfillment book, with money falling from the sky, skateboard TVs, swimming books, giant hammocks, and other fantasies from the mind of Dr. Seuss.  It would make a great lead-in to a drawing/writing assignment for elementary school students: what you ask for on the first of Octember?

As I mentioned above, this was the first book I remember reading on my own, and I’m pretty sure I can recite the whole thing from memory.  I still consider it one of the best books for beginning readers.  The text is simple, with repeated phrases (“They see a _____,” “They look at ______”).  The rhymes and illustrations help kids decipher the new words.  It’s also a great book for a classroom unit or storytime about the five senses. 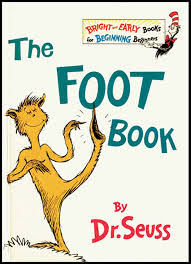 A great book for teaching left and right.  I actually had the kids stand up and act it out: standing on their left or right foot, holding their feet up, etc.   It was also the shortest of the books I read, and was the perfect one to end with.  I paired it with The Hokey Pokey the next day for a Toddler Storytime, and it was a hit there as well.

I did several active songs like Shake My Sillies Out and Five Monkeys Jumping on the Bed, to give the little guys a chance to move around.  Then I had the kids grab stuffed animals to dance with for Waltzing with Bears.  This song was written by Dale Marven (not Seamus Kennedy, as I had written originally.  Thanks for Mike for the correction), but based on a song from Dr. Seuss’ Cat in the Hat Songbook called My Uncle Terwilliger Waltzes With Bears.  Here are the lyrics as I remember them, along with the uke chords I used.  Click on the triangle to hear the first verse and chorus:

I went to his room in the middle of the night.
I tiptoed inside and turned on the light.
But to my surprise there was no one in sight.
I’m sure Uncle Walter goes waltzing at night!

I gave Uncle Walter a new coat to wear,
But when he came home he was covered with hair,
And lately I’ve noticed there’s several new tears,
I’m sure Uncle Walter goes waltzing with bears!

We asked Uncle Walter, “Why won’t you be good?
And do all the things that we say you should?
We know that you’d rather be out in the wood,
We’re afraid that we’ll lose you, lose you for good!”

We begged and we pleaded, “Oh please won’t you stay!”
And managed to keep him at home for a day,
But the bears all barged in, and they took him away!
Now he’s waltzing with pandas, and he can’t understand us,
And the bears all demand at least one dance a day! 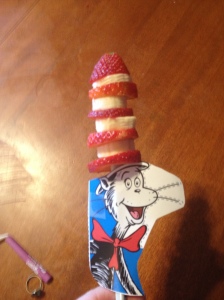 There are a number of variations of this snack ideas online, including some that use grapes, marshmallows or bananas to make the head of the cat.  For mine, I printed this picture from PBSkids.org, then cut out the cat, cutting off his hat.  I taped the picture onto wooden chopsticks for the kids, then gave them bowls of bananas and strawberries to make the hat.  They didn’t last long!  This would be a fun and healthy patterning activity too.

OTHER BOOKS BY DR. SEUSS

Talk about a reading challenge: this book is full of tongue-twisters that get harder and crazier with each page!

Between this book and Thidwick the Big-Hearted Moose, I get the impression that Dr. Seuss had trouble with unwanted houseguests.  This is a fun one to read aloud.  Lindsey, who recommended it, also mentioned this interesting fact from Wikipedia: “In a July 1974 collaboration with political humorist Art Buchwald, Dr. Seuss took a two-year-old copy of his book, crossed out ‘Marvin K. Mooney’ wherever it occurred and wrote in ‘Richard M. Nixon’. With Dr. Seuss’s consent, Buchwald and his editors reprinted the markup as a newspaper column, published July 30, 1974. Beset by Watergate, U.S. President Nixon resigned ten days later on August 9.”

My son used to demand to hear this one every night for what felt like weeks!  It’s a wild ride through all manner of wacky Dr. Seuss inventions: Yinks and Yops and Zans and Gox and lots and lots of fish.

I still have the copy of this my parents gave me when I graduated high school.   A great read for any age, describing all the ups and downs, frustrations and hopes of growing up.

What Was I Scared Of? by Dr. Seuss (Amazon.com link) Recommended by Ria Tajbl

I know this story from the Seuss collection called The Sneetches and Other Stories.  I didn’t realize it had since been published as a separate picture book with glow-in-the-dark ink.  It’s a fun, slightly spooky story about pale green pants “with nobody inside them!”  A good read-aloud for a storytime about emotions and fear.

I Can Lick 30 Tigers Today! and Other Stories by Dr. Seuss (Amazon.com link) Recommended by Michael Lambert

I admit I don’t think I’ve ever read this one, but I will have to check it out!  A bold, little version of The Cat in the Hat brags that he can beat 30 tigers, but then reconsiders until the number gets smaller and smaller.  Michael Lambert, who recommended this one, also mentioned that one of the other stories in this collection, King Louie Katz, is a great one for storytime.

The Cat in the Hat by Dr. Seuss (Amazon.com link) Recommended by Maria Kurland

Another childhood classic about a wonderful, naughty character.  As a kid, I always wished the Cat in the Hat would pop by my house for a visit, in spite of all the trouble he caused.

I Had Trouble in Getting to Solla-Sollew by Dr. Seuss (Amazon.com link) Recommended by Thomas Moore

My parents are always telling me “there is no Utopia,” and this book is proof.  When the hero of this book stubs his toe, he decides to move to “the City of Solla Sollew, on the banks of the beautiful River Wah-Hoo, where they never have troubles! At least, very few.”  Until he gets there, and realizes every place has its problems.

What is your favorite Dr. Seuss book and why?

6 thoughts on “Oh, the Places We’ll Go! A Celebration of Dr. Seuss”